A Beacon for the Royal Town of Sutton Coldfield in celebration of the Queen’s Platinum Jubilee! 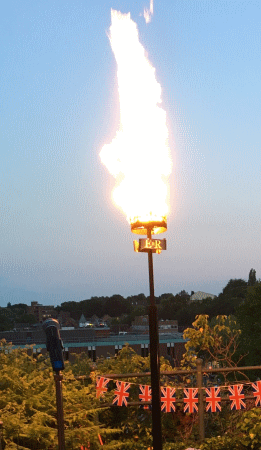 On Thursday 2nd June 2022, Holy Trinity Parish Church hosted an event for the community on the historic occasion of the Queen’s Platinum Jubilee.

Members of the Sutton Coldfield Local History Research Group were there when the Right Hon. Andrew Mitchell opened the event in his capacity as Patron of the Friends of Holy Trinity Parish Church and as Sutton Coldfield’s Member of Parliament.  He had also been elected Town Crier for the evening!  Also present were the Royal Town Mayor Janet Cairns and the Deputy Lieutenant Dr John Craggs.  John Routh, Rector of Holy Trinity Parish Church, led the people in prayer for Her Majesty The Queen.

One of the Research Group members, Stella Thebridge, conducted the excellent choir comprising members of four brilliant choirs from across Royal Sutton Coldfield, i.e. Holy Trinity, St Peter’s, St Chad’s and Sutton Coldfield Chamber Choir.  They sang “A Life Lived with Grace”, which had been chosen via a worldwide competition.  This was being sung throughout the Commonwealth to celebrate Her Majesty The Queen’s 70th year as Monarch and Head of The Commonwealth. The musicians accompanying them were Claire playing keyboard, who is actually the organist from St Chad’s, and Tim the trumpeter also from there.

The Trinity Centre Car Park was thronged with people, who sang “God Save The Queen” with gusto and gave a rousing cheer as the Beacon was lit in the area of the church grounds which overlook the town. Barriers had previously been put up to safeguard the public from the danger caused by the crumbling perimeter wall.   That evening, Beacons were being lit all over the country as part of the four-day celebrations to honour the reign of Her Majesty Queen Elizabeth II.

The weather was also kind, making it a most memorable Summer’s evening!

Andrew Mitchell MP and Town Crier for the evening

John Routh the Rector of Holy Trinity leads a prayer

Musicians at the ready

The Choir dressed in red white and blue

The Beacon is lit

The Beacon lights up the town