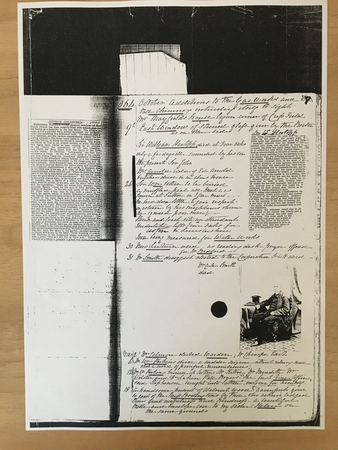 Additions to the Gas Works and tall chimney intruding itself to sight. Mr Mayfield's house began - corner of Cup Field.

East Window of stained glass given by the Rector as on other side (of the page?)

Sir William Hartopp died at Four Oaks only a few days ill - succeeded by his son the present Sir John.

Sir Wm taken to be buried a muffled peal all that was known at Sutton or I fear much ... ... he had done little to gain respect or esteem by his neighbours whom he ignored poor man - Hearse & coach with an attendant undertaker left Four Oaks for Aston in Leicestershire.

Town being measured for Water Works.

Mr Wm Perkins died a sudden seizure without retaining sense. What a crowd of painful remembrances!

A handsome present of walnut wood Davenport given to each of the Miss Bodingtons by those who acknowledged their great usefulness and kindness - a beautiful bible and envelope case to my sister - Helen - on the same grounds.