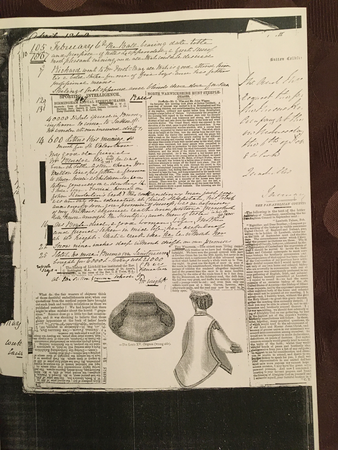 The Ball bearing date title and purpose of notes (here) appended, a great succes most pleasant evening, and all that could be desired.

Richard went to Mr Frost. May all that is good attend him. Tis a bold stroke for one of five boys and his father's professional means.

Starlings first appeared and blinds drawn down for sun.

40,000 tickets issued in Birmingham to come to Sutton!! No wonder at our increased dirt!

600 letters this morning - so much for St Valentine. My good old friend Mr Beardoe died he was born at Little Aston where Mrs Mellor lives, his father a farmer to whose house as children we were taken generally on a donkey 1h (one hour??)

I have been carried home on John Kindliness's back. This extraordinary man just gone was an only son educated at Christ Hospital, his talents and energy soon gave promise of success; was an admirer of my mother; acquired wealth and position in Manchester? Well known amongst the scientific, and men of taste in his 90th year.

Mrs Boyle died a good woman, wife, Mother and friend, taken in mid life, her usefulness at its height. What a wreck will he be without her?

Re Weather - snow in April

Snow nine inches deep without drift on our premises.