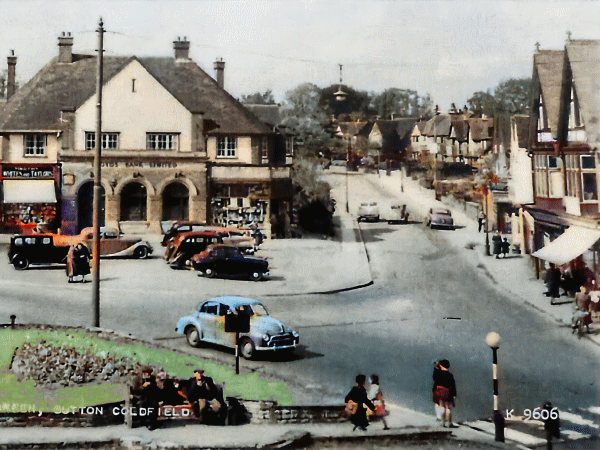 I moved to Mere Green in December 1960, aged five, and lived there for the next twenty years.

My earliest memories are of a languid, suburban ‘village’; quiet roads, elderly men sitting on the bench on Mere Green island, lazily watching the traffic going round; people patiently about their business. Four Oaks Road, Lichfield Road, Luttrell Road, Ladywood Road, these and many more bring back a recollection of warm, wide tree-lined streets, prosperous, comfortable but not showy, a safe and pleasurable place to wander around in my StartRite sandals.

This was the cross roads where every shop you might need could be found in a few rows of  Edwardian buildings, shop windows with black and white plaster and woodwork above and pointed roofs, not much changed over fifty years:  Arnold Stores (whose delivery boy peddled up Hill Village Road with boxes of groceries), Timothy Whites, the newsagents, Powers Ironmongers, Bromwich’s bakery , two butchers, Lloyds Bank, a Post Office, a dry cleaners, Joseph Lucas in Mere Green Road, a gents outfitters and the mysterious Four Oaks Spring Company both in Belwell Lane.

Then came George Masons with a ladies hair dresser above it and later the new library (not the one you see today) and an adjacent shop and office building in Mere Green Road. Here was a ‘fancy goods’ shop run by Stephen and Doris where I bought Airfix models and Humbrol paint and a men’s clothes shop selling ‘up-market’ Van Heusen and Roccola shirts at 75 shillings and 21/6d. There was another short parade behind the service road in Lichfield Road (still there) eventually with La Gondola - an ‘upmarket’ Italian restaurant, only a few yards away from Woolworths and then Ian McClouds where my mother had her hair done every Friday for over twenty years. Initially, she had gone to someone called Robert who had an upstairs salon behind the pork butchers in Mere Green Road. The other butchers (I think called Profits) was on the corner of Hill Village Road and Mere Green Road, demolished to make way for the offices of Vickery and Co, Solicitors; when you bought meat it was chosen from the counter and paid for at a hatch where the cashier sat. The people who worked in these businesses were soon known to me and made up my small childhood world.

We lived in a detached house, built in the late 1950s, in Hill Village Road, just across from the junction with Butlers Lane, diametrically opposite the Red Lion pub, an old white building which was subsequently demolished by the brewery owners, Mitchells and Butlers, and redeveloped in the typical style of the times, christened a ‘gin palace’ by its neighbours.

We often walked from Hill Village Road near where there are now apartment blocks, up the side of the high brick wall (long since demolished) and across a field to where Sherifoot Lane meets Hillwood Common Road. The wall had been commissioned by the owner of Hillwood House, then a gothic ruin, to provide something for the unemployed local men to do during the Great Depression. We played in the derelict house until it was demolished to make way for the flats. My mother’s cleaning lady, Doris, lived with her sister Daisy in Chestnut Cottage opposite our house, inhabited by her family for well over a hundred years, and she used to tell me stories of the House and the farm which was another derelict building fifty yards down the road from our house.  A cottage, a farm and a big house, reminders of Mere Green before the Great War.

In addition, ‘The Village Shop’ was a small general store about 500 yards away from the house, run my Mr and Mrs Jenkins, who drove a large, black pre-war Austin. The business was originally run from a very old cottage and then from a purpose built shop next door (now offices).

On Saturday evenings my father might go the The Chicken Inn for steak and kidney pies and chips to eat watching our black and white television and periodically cars would be taken to Stella Tyres or to the small garage on Lichfield Road. Petrol was bought from a garage in Mere Green Road owned by the Harrisons who also lived in Hill Village Road and who sold NSU cars. As a family we were keen on cars and my father and I would walk our cocker spaniel down to P J Evans to look at the Mark II Jaguars in the showroom. On one occasion when my father was away, the exhaust pipe blew on our Ford Zodiac and the handlebar moustached manager offered my mother £5 if he could get the same exhaust note out of his E Type Jaguar!

The family doctor was initially Doctor Mallim whose surgery was opposite the Half Way House pub, now The Greenhouse. We then moved to Dr Livingstone (sic) in Streetly before settling on Doctor Fairley who had a surgery in her house at the junction of Streetly Lane and Four Oaks Road. When she retired we stayed with her successor, Dr Farrow.

Cycling was very much a part of life, with few constraints on where I and my friends went. During the holidays I would often disappear for the morning into the lanes and fields around Little Hay and when I was older I would ride off into Sutton Park, taking care not to come off over the plank bridges alongside Bracebridge Pool. The park was generally a quiet place. None of us ever gave a thought to anything undesirable happening to us, and, if our parents did, they didn't show it. My mother would take me for a coffee and a digestive biscuit at the Bracebridge cafe - I recall still mornings with the silence broken only by the sound of the water wheel and the occasional honking of the ducks.

Entrances to the park were guarded by a uniformed park warden who emerged from a small thatched pillar box to check the sticker on the car windscreen and to salute you through. Sutton residents obtained these stickers from the Town Hall every year and were granted free admittance to the park.

Initially, I went to the St Joseph’s Catholic Infant school in Mere Green. The headmistress was Sister Bernadette and my mother taught there for a short while before moving to teach at St Pauls Convent, nearer to the town centre. Margaret Mackay (nee Hayward), was my form teacher and  at the age of seven I moved to the Convent. Until then I was dropped off each morning at the house of one of the teachers, Eileen Morrison, who lived with her two daughters in Belwell Lane.

Life at St Paul’s was an idyllic period. The Christmas party was held in the ballroom at Penns Hall Hotel and we had Britvic Orange with glace cherries and entertainers with the whole event topped off by balloons being released from a big net in the ballroom ceiling - such sophistication was just lapped up by me and many of the other children. In addition to the usual subjects, we were taught elocution by Mrs Frith and music by peripatetic teachers as well as football.

To begin with, we went to school on the bus. I would always hope we might get a lift with Derek the young school Gardner, who lived with his mother and had won some money with which he had bought a green, two door, Ford Cortina. Later my mother bought a grey Morris Minor, RNX 546, born the same year as me and for which she paid £155 and we went to school in that. It had red leather seats and tartan seat covers to keep us warm in the Winter. In the Summer we would go on outings to Blithfield Hall and Shugborough. On one occasion we were stopped in a police road block during a manhunt for Harry Roberts who had shot a policeman during a robbery. It was all very exciting but no, we did not have Harry Roberts in the boot!

After the austerity of the post war years, the sixties were, at least for me, a period of relative tranquility, increasing affluence - the ‘package holiday’, improving education, opportunity and health care. Nowhere could these changes have been better reflected than in Mere Green. After an interval of over twenty years I have just returned - no longer a sleepy suburban village!

With thanks to Steven Underhill for colourising the postcard.