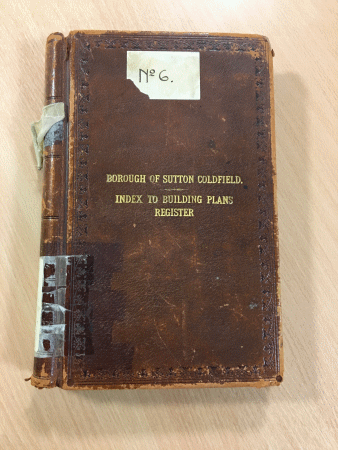 Background: Sutton Coldfield has been part of Birmingham since 1974; before that it was an independent town in Warwickshire, governed initially by a ‘Warden and Society’, but became a Municipal Borough in 1886. It has retained a large Local History collection and the Building Plans and accompanying Registers provide an almost complete record of building development showing the growth of the town between 1887and 1963.

Building Plan Registers: There are eleven volumes covering the years 1887 – 1963. The format varies slightly, but generally gives: - the date; number of plan; name and address of owner, architect, builder; description and situation of development; whether approved, dates of inspection of foundations, damp course, drains and completion.

Index to Building Plan Registers: There are twenty seven volumes covering the years 1898 -1967. They are arranged by alphabetical order of streets and give name of owner, description of development, plan number, remarks.

Building Plans: These are kept in brown foolscap envelopes. Numbers 1 - 12,180 (1887 – July 1954) are kept on shelves. There are further approximately 9,000 plans in seventy five boxes, giving a total of approximately 20,000 plans. As far as I am aware, the collection is virtually complete, only a few later plans relating to minor additions to houses were destroyed. The envelopes contain the Building notice, records of inspection of foundations, damp course, drains and completion, site map, elevations and plans and correspondence with builders, architects.

There are two boxes containing minutes of the Town Planning sub-committee for 1911-15 and records of public meetings when a town plan was developed using the Ruislip-Northwood scheme as an example. This was interrupted by the war and a second scheme was developed in the 1920’s with a major enquiry in 1929, the act was passed in 1934. There are coloured maps to accompany both schemes.

The building plans and registers have been used to trace the development of individual streets and buildings. They also identify changes in the building cycle, changes in builders (moving from local, to regional and national) and changes in the number of houses per application. The inter war period brought the development of council and subsidy housing. The town planning schemes and council minutes indicate attitudes towards developing Sutton Coldfield as a ‘nice place to live’. The plans have also shown the development of fixed shop retailing in the town and suburban shopping centres.