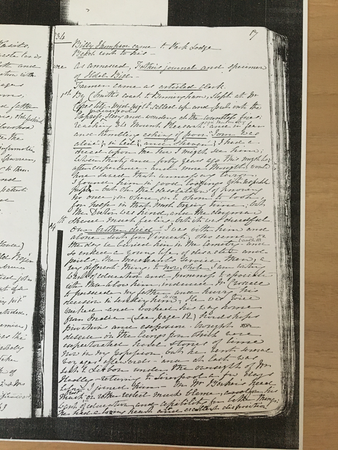 Beach went to his.

As annexed, Father's journal and specimen of Hotel Bill.

By C Smith's coach to Birmingham, slept at Mr Copes till midnight, called upon and put into the Express for Liverpool. Seeing and wondering at the countless fires; reaching 24 Mount Pleasant 8 o'clock in the morning and in fear and trembling asking if poor "Tom was alive"; in bed "and shaven" I had a dread upon me how I might see him; between thirty and forty years ago, this might be; after-experience and more thought, would have saved that unnecessary terror. I found him in good lodging with respectable people - but oh the desolation of knowing no-one, or where, or to whom to look for help in that most trying time, but the Doctor was kind, and the clergyman showed much feeling - but it was dreadful.

Our brother died. I was with him and alone - sent for Vincent, who came on the day we buried him in the cemetery - and so ended a young life of disaster and perils - the Merchants Service then, a very different thing to now, while I am writing. Want of education and proneness to associate with those below him, induced Mr Croxall to persuade my father and hurry his decision in sending him to sea - He was twice wrecked and worked his way home from India (see page 12) - hardships privations and exposure brought disease in the lungs from which were expectorated hard stones of lime now in my possession, but he went several vogages afterwards - and at last was left (in?) Lisbon under the oversight of Mr Hadley - returning to Liverpool a few days before I joined him - On Mr Barker's head must rest or rather rested much blame for his want of education and capability for better things. He had a loving heart and excellent disposition.