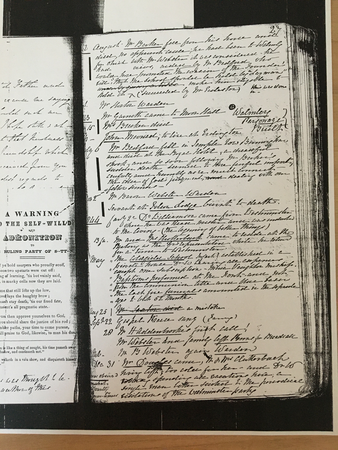 Mr Barker fell from his horse and died, no apparent cause; he had been to Walmley for which with Mr Webster it was considered he had {indecipherable text} views, aided by Mr Bedford, who would have promoted the evasion of the Founder's Will, "that the school should be held by Laymen" makes him eligible to hold it - (succeeded by Mr Eccleston) - this was done in {indecipherable text}.

John married; to live at Erdington

Mr Bedford fell in Temple Row Birmingham and died at the Royal Hotel, a dreadful shock, and so soon following Mr Barker's sudden death seemed to have fearful import, carefully and humbly as he must connect - the idea of God's judgement, dealing with our fellow sinners.

Dr Williamson came from Westminster where he was Head Master and was inducted to the living - (the beginning of better things).

Mr and Mrs Clutterbuck came to reside at the Rectory as the Dr's representative while he returned for a time to Westminster.

The Coldfield School Infants established in a private house, Dr W bearing all expenses except one subscription - Marian Vaughton Mistress

Baptisms performed at the Font and not from the communion table and blue basin. The last five funerals consecrated in the separate ??? 52 months

Mr Douglas came, mr and Mrs Clutterbuck having left, too cold for her and Dr W spending all vacations here; a single man better suited to the periodical isitations of the Westminster party.