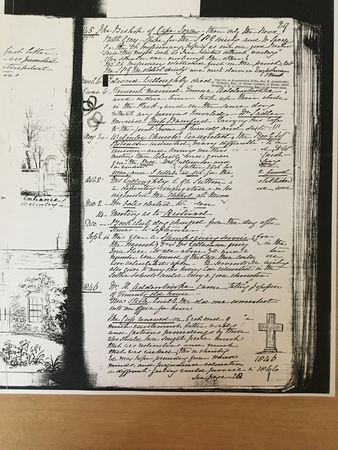 The Bishop of Cape Town - then only the Revd Robt Gray - spoke for the SPG Society and Mr Savage for the Ch (Church) Missionary Society, hoping as our own good Rector said "they might work as twin sisters without rivalry", why should one embarrass the other? the Ch Missionary established first in the parish, but The SPG the oldest society and most claim on Englishmen I think.

At Kingswinford, by the Rev E Addenbrook, V Holbeche Esq. of Sutton Coldfield to Emma, eldest daughter of EA Addenbrooke, of the former place.

Vincent married Emma Addenbrooke, and in due time took up their abode in The Park, and on the same day Mr Sadler married Miss Bamford, bringing his wife to the joint home of himself and sister!!!

Meeting as to Railroad

Book Club day changed from the day after Xmas to September.

In this year a Thanksgiving Service (for the harvest). Dr and Mrs Williamson giving {indecipherable text} in the Town Hall - to all above 70 and a greater number were found of that age than could have been calculated upon. A Servants {indecipherable text} also given to any who having been educated in the Sutton Schools could bring a good character.

Mr H Addenbrook came, taking possession of Vincent's old house - new stable built, the old one converted into an office for him.

The Cross renewed on east end of {indecipherable text} much excitement, bitter words and factious proceedings by those who should have sought peace, much that was rediculous and much that was wicked; tho' in charity we may hope proceeding from narrow minds, and prejudiced education; a different feeling would prevail in 1866. (see p28)