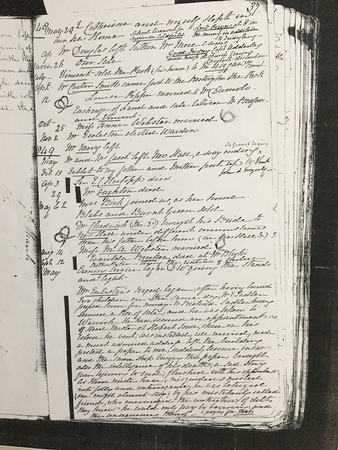 Catherine and myself slept in our new home.

Lent Prayer at 8 in the morning in addition to Friday evening.

Vincent sold The Park (his house) to Mr Wiggan.

Mr Carter Smith came first to the Rectory then The Park.

Louise Pepper married to Mr Dumolo - Exchange of Land and sale between Mr Bedford and Vincent.

Tablet to my father and mother put up by Vincent, John and myself.

Mrs Bick joined us, as her home.

Mr Chadwick (the 3rd) bought his bride to New Hall under different circumstances than his father before him (see New Hall).

RotherHythe - during the visitation of Cholera.

Mt Eccleston's tragedy began; after having buried two children on the same day; Mr E Sadler pressed him for money - Mr Richard Sadler having secured a bill of sale, and he was taken to Warwick. He had secured an appointment as HeadMaster at Hobart Town (?) where on his release he went, was installed, well received, made a much admired address - left the building, posted a paper to me, suddenly became insane and the same ship bringining the paper, brought also the intelligence of his death, a sad story from beginning to end, flushed with his appointment as HeadMaster here; misguided and misled into folly and extravagance, he was betrayed (one might alsmost say) by his mistakenly called friends, who encouraged the contraction of debts they knew he could only pay by borrowing, and the consequences thereof - paying for that.