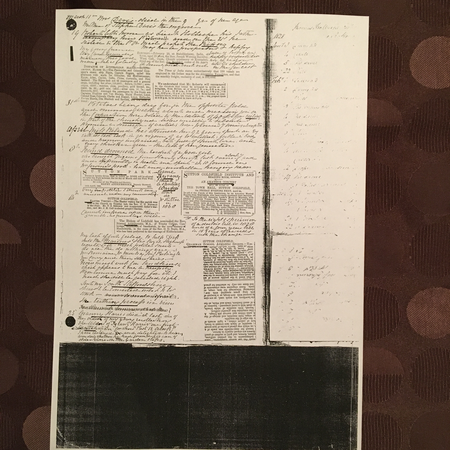 Mrs Davis died in the 9-- year of her age. Mother of Stephen Davis the engineer.

Robert left home as Lieut Holbeche, his father accompanying him Portsmouth and on the 21 he sailed in the PO Mail packet, the "Ripon". May he be prosperous and happy.

Newsucutting re Robert's ship above

My young friend, Eliz Jane Grundy married this good man - but, as yesterday it seems, and went out full of (?) and happy expectation, now a widow with 2 children in the Far East.

Newscutting re Rev Bardsley who died of fever at 29

Newscutting re change of train timetable.

Potatoes being dug for in the opposite field and ominous walking about and measuring going on. The Corporation have voted to the extent of 40£ for railings in part of the Churchyard - sisters unwilling to subscribe, promise a sovereign if wanted, have procured 7 sovereign subscription.

Miss Riland has attained her 92 years, spent an evening with us last week in great vigour of as to intellect; feeble in body and memory impaired but full of spirit, love and every christian grace - the last of her generation.

Found drowned the verdict of a poor girl who brought pigeons from Harry Smith last evening about 7 and apparently in health and spirit at 10 found in Mr Jerome's pool - hat and umbrella hanging near.

Newscutting - no dogs in park

Very impolitic I think and unusual under any circumstance.

Newscutting re Easter Vestry - appointments and "Cannot improve upon them. Grumble as grumblers will.

My last efforts failed to help Dick into the Marines "His Royal Highness regrets", so most polite snub as all the do nothings warned(?) - Mr Romaine, Mr Mowbray, Sir J Packington, Mr Corry and their secretaries. Now must work for Sandhurst which appears to me a necessity. Poor Emma must pay for it. I trust she will beguided right.

Sent my South Staffordshire shares to be converted into LNG Stock - the teething process in view.

Granny Harris died "at last" one of the oldest of my young recollections. The Widow of "? Harris" our first watchman for whose "Past 12 o'clock" I have listened and delighted to hear, wondering whether he had found his can of elder wine on the garden steps.