'Tall Tales from the Top of Trinity Hill,' by Janet Jordan 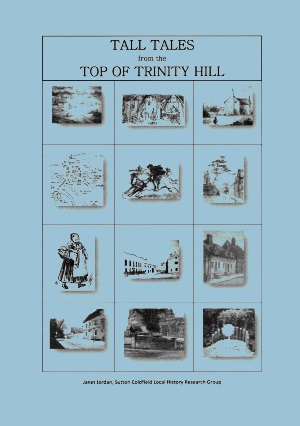 It is here at the top of Trinity Hill, where it meets Coleshill Street and Rectory Road that the characters of these tales came into being. Up there, I 'saw' Aethel, the young Anglo Saxon girl, trudging up the hill with her buckets of water.  So deep is the path now that it is hard to imagine it as a track, leading down to the causeway crossing the marshlands of 'Sutone' over a thousand years ago. Elizabeth, too, I sensed, dying alone in her little cottage behind the church, as a result of the extreme poverty that beset so many in the 15th century.  And George, always young at heart, I 'heard' rather than saw, as he drove his old Bentley coughing and spluttering along Coleshill Street.

These and many more will be seen to dovetail their lives into events that I know took place over the centuries.  I found dwelling places for them all, some known to have existed, others simply educated guesses. I hope you will gain pleasure from reading their stories and find it hard to believe that actually the characters really didn't exist!