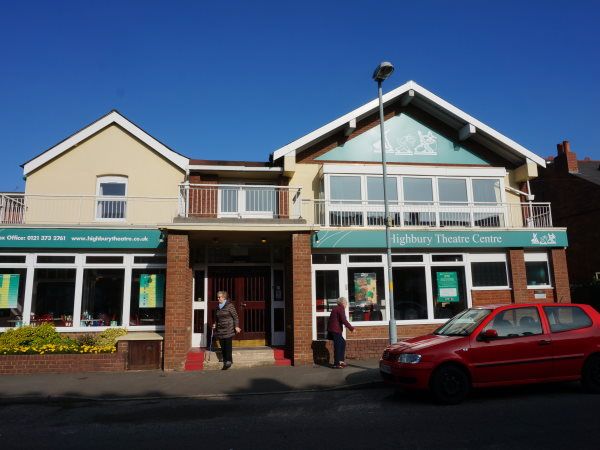 Didn’t we have a lovely time!

Thirteen members of the Sutton Coldfield Local History Research Group were given a very warm welcome at Highbury Theatre this morning, Wednesday 23rd October, and it was a complete revelation.  The theatre is rather like the ‘tardis’, of Dr Who fame, as it seemed that the more we saw, the more there was to see.

After coffee in the theatre’s café we took our seats for a real treat.  Steve Bowyer, the chairman of the theatre, talked us through the history of the building and the vision of the founder, John English . We were then shown a film, with original footage, from the first days of the construction work in Sheffield Road in the 1930’s, although the origins of the group date back to the mid 1920’s at the Folk House in Erdington.

John English used his contacts, in and out of the theatre world, to keep costs down and the group could give today’s re-users a run for their money with most of the materials being recycled including bricks and roof tiles. Volunteers built Highbury during the war based on a wooden hut (once sited in Sutton Park) and due to WW2, with most of the men away, the majority of the labourers were women.

A tour of the building followed, with the chance to talk to members of the company who were hard at work in the woodworking shop, studio and wardrobe. We stepped onto the stage of the current production, Filumena, a comedy set in Italy.  We walked around to the rear of the building and viewed the other buildings owned by the theatre including Orchard House, known to some of the members as Highbury Playgroup but now converted to two apartments.

A state-of-the-art computerised lighting board has recently been installed with emphasis on saving energy and money. We viewed the ‘Green Room’, and the modern meeting room which has a display of the Highbury Theatre timeline.

Still much to see but time had run out and we reluctantly stepped into the autumn sunshine and made our way home.

Chair rescued from bombed out Prince of Wales

Part of original wall much of which was built by women

Masks on one of the walls

Timeline for Highbury Theatre - First Board

Timeline for Highbury Theatre -Second Board

Timeline for Highbury Theatre - Third Board