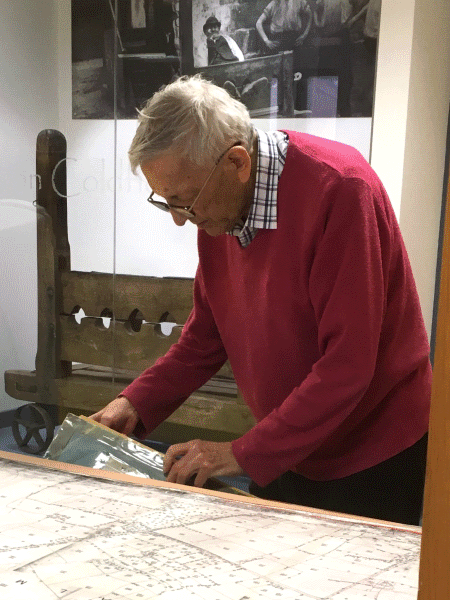 It is with great sadness that we have to report of the death of Roger Lea on the 21st August 2020.  He was one of the founders of the Sutton Coldfield Local History Research Group, taking on the job of Chairman and leading us skillfully over the past 34 years.

Having been employed as Head Librarian in Sutton Library until the mid 90s, he was uniquely qualified to teach about the history of the town and therefore most members will have met him on one of his short courses.  You may remember attending either Villa Regis, An Introduction to Local History or Know your Town.

Having completed his course, you would then have immersed yourself in a research project of your own, perhaps casually suggested by Roger as "worth looking into"!  He used to say "You will be an expert in your field", enticing you to look for those little gems that make research so rewarding and, of course, by then you were hooked!

Everybody knew that he was a most remarkable man, very quiet and unassuming, but always ready to give up his time, with an amazing knowledge and an ability to lay his hands on all sorts of interesting and relevant material.

His own publications, which can be found on the Library shelves, such as Scenes from Sutton's Past, Steaming Up To Sutton, The Story of Sutton Coldfield and The Blue Plaque Trail, are always well thumbed and provide first class source material, but he wrote many short pieces of very valuable research which are still available and are gradually being added to the group's website.

In 2008, The Observer Newspaper asked the group for a candidate who would be prepared to do a weekly History Spot and Roger took on the task  with great enthusiasm.  For many years, this kept him very busy until December 2017, when unfortunately he fell ill.  Again, these articles are on the website, providing yet another magnificent record of Sutton's past.

One of the group's aims is to facilitate, publish and publicise the research done by the members and to this end Roger also instigated and, for several years, edited shorter pieces of research provided by the members.  These he would assemble into the booklets we know as Proceedings which were published every two years, also available online.

It is daunting to think that we will never be able to seek Roger's help and advice in the future, but we can rest assured that he left the group able to maintain the high standard required for work produced in its name.

Another facet of the group's activities is field trips and outings and on many occasions members have trudged behind him across fields, both in thunderstorms and very hot weather, often for many miles around outlying areas of the town.  Stopping en route, he would point out factual evidence of days gone by, and, if we were lucky, he would hand out notes which could be kept for later perusal.

Roger actually belonged to several other groups, showing the same dedication.  Very often, by his side would be his wife, Christine, a driving force and loving support.  Many can recall with gratitude, at the end of a long winter's evening after listening to a lecture or at the end of a summer's day outing, Christine saying "How are you getting home?  Oh, Roger will take you!"  And he did it, without a murmur!

The Sutton Coldfield Local History Group owes them both a great debt and we will all remember them with great affection.