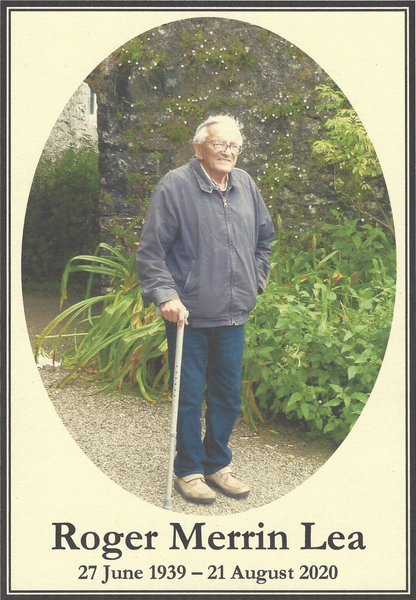 This is the Order of Service for the Funeral of Roger Lea, Chairman of Sutton Coldfield Local History Research Group,1984 - 2020.  He died on 21st August 2020 and is now interred at Oscott Cemetery along with his wife, Christine.

A few Committee Members of the Research Group were invited to attend the service which was conducted under Covid-19 restrictions.  Only 30 persons were present, all wearing face masks and sitting 2 metres apart.  One sat on a green plastic card which, on leaving, you turned over to show red, indicating a position that needed to be sanitised afterwards.

The Requiem Mass was a very moving but simple ceremony and music, chosen by Roger's family to reflect his taste, was played during the service.  No singing of hymns was allowed.

Eulogies by the Parish Priest and Roger's sons, reflected what the Group already knew of Roger's quiet nature and his willingness to give his time to all the groups with whom he was associated.

He certainly left our group with a wonderful legacy - a love of local history, which we will continue to pass on to others.