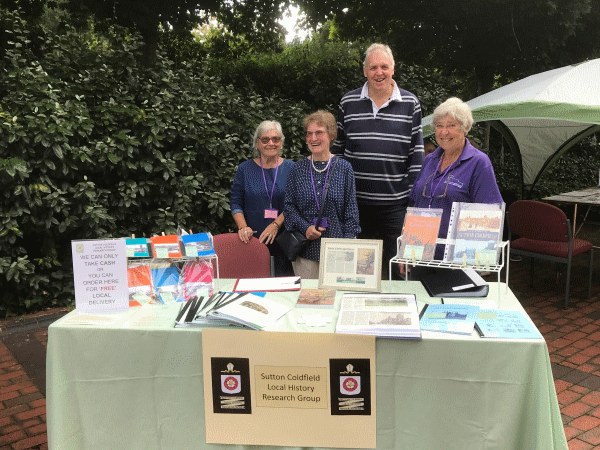 Birmingham Heritage Week took place this year between the 9th and 19th September, which was a bit of a misnomer as it actually lasted for 11 days!

Heritage Week gave the people in the region the chance to explore parts of the city they might not normally get to experience.

Numerous stalls and displays were set up for viewing by visitors, amongst them being FOLIO (Friends of Libraries in our Sutton Coldfield.), the Civic Society and FOSPA (Friends of Sutton Park Association).

The Sutton Coldfield Local History Research Group had displays based upon themes such as the Riland Family by Eileen Donohoe, Duncumb’s Recipe Book from the 1800’s by Janet Jordan and the Memorials and Gravestones of Holy Trinity Parish Church by Marian Baxter.

Pete Knight, our Sales Co-Ordinator, had a sales table with all the Group’s publications and, by all accounts, he did a ‘roaring trade’.

The following photographs were taken at the time:-