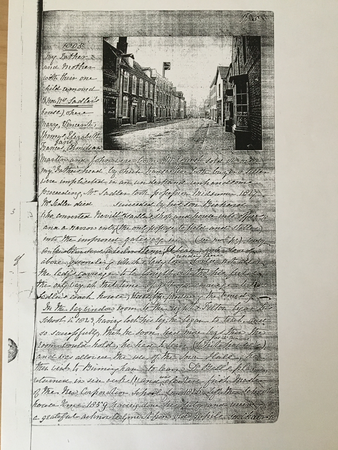 My Father and Mother with their one child removed to (now Mrs Sadler's house) where Mary, Vincent, Thomas, Elizabeth, Francis, Jane, Amilian, Martin and John were born. Mr Guest sold it over my "Father's head", by which transaction both buyer and seller were implicated in an underhand, unhandsome proceeding. Mr Sadler took possession Midsummer 1817. Mr Sadler died succeeded by his son Richard who converted Nevill's (Sadler's shop and house into offices) and a narrow entry (the only passage to field and stables) into the improved gateway in (see next pg) - consequence, a ludicrous circumstance - a beau some doors above quarrelling with his lady love residing there would not allow the lady's carriage to be brought out thro' his field, the only way at that time of getting a carriage to the Sadler's coach house, necessity producing the remedy.

In the bay window room to the right Felton began his school in 1823, having lost his leg; he began to teach, and so successfully, that he soon had more boys than the room would hold, he had to leave (Whitehouse's, as it then was) and was allowed the use of the Town Hall; he then went to Birmingham to learn Dr Bell's plan, returned in six weeks!!! and was elected first Master of the New Corporation School Jan 1826. Left the School house Xmas 1859 having done his duty - and receiving a grateful acknowledgment from old pupils (see Chair Pg 50)