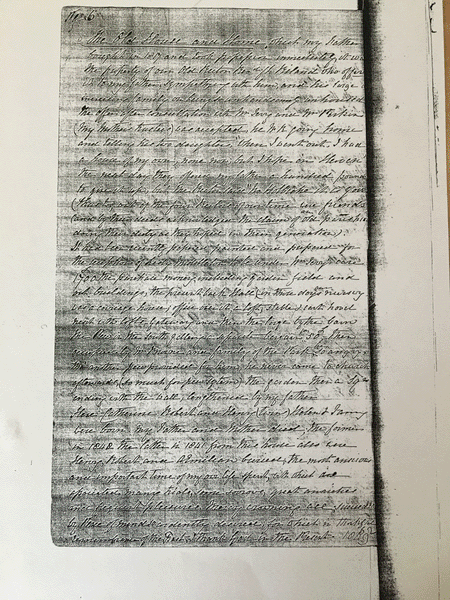 The Old House and Home which my Father bought in 1817 and took possession immediately, it was the property of our Old Rector Reverend John Riland who offered it to my father, sympathising with him, and his large and increasing family on being so unhandsomely unhoused. The offer after consultation with Mr Terry and Mr Perkins (My Mother's Trustees) was accepted, he, Mr R. going home and telling his two daughters "When I went out, I had a house of my own, none now, but I hope in Heaven." The next day they offered my father a hundred pounds to give it up, but the Rector said "No, Holbeche it is yours (thus two, out of the four Rectors of our time, were friends (and by their deeds acknoweldged the claim of an old parishioner doing their duty - as they hoped - in their generation). It had been recently papered painted and prepared for the reception of Lady Middletown to be under Mr Terry's care - £1,700 the purchase money including garden, field and outbuildings, the present back Hall (in those days our nursery was a carriage house; office over it, a loft, stable and cart hovel (next?) with lofts, gateway and then the forge by the barn. The Pew in the south gallery a separate bargain for £50, - then occupied by Mr Browne and family of the Park, he so angry, tho' another pew provided for him, he never came to church afterwards, (so much for pew system), the garden then a square ending with the wall, lengthened by my father. Here Catherine, Robert and Henry (twins), Helen and Fanny were born. My Father and Mother died; the former in 1848, the latter in 1841, from this house also were Henry, Robert and Aemilian buried; the most anxious and important time of my own life spent, with which are associated many trials, some sorrows, great anxieties and frequent pleasures, mercy crowning all, succeeded by peace of mind so ardently desired, from which in thankful remembrance of the past, I thank God in the present. 1849 (written in 62?)