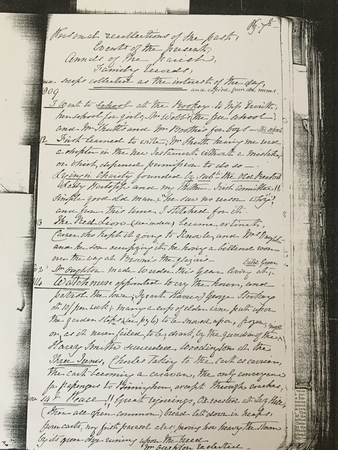 Personal recollections of the past;

Events of the present;

Annals of the parish,

And scraps collected as the interest of the day.

(and copied from old mems)

I went to school at the Rookery - to Miss Everitt, her school for girls; Mr Webb's (the free school), and Mr Shutt's and Mr Boothe's for boys - the schools.

First learned to write; Mr Shutt hearing me read a chapter in the New Testament without a mistake; on which depended permission to do so.

Lying in Charity founded by sub(scription) The Old Rector, Lady Hartopp and my Mother - First Committee!! Simple good old man - "he saw no reason why"? and from this time I stitched for it.

The Red Lion (see index) became extinct, Carver who kept it going to Knowle, and Mrs Oughton and her son occupying it, he having a billiard room over the way at Browne's the glaziers -

Mr Oughton made Warden this year living at Wild Green.

Watchmen appointed to cry the hour, and patrol the town; Tysart Davies & George Starkey at 10/- per week; many a cup of elder wine put upon the garden steps, (see pg 6) to be snowed upon, frozen, or, as it never failed to be, drank by the guardian of the night.

Harry Smith succeeded Woodington at the Three Tunns, Charles taking to the cart as carrier, the cart becoming a caravan, the only conveyance for passengers to Birmingham, except through coaches.

Peace!! Great rejoicings, ox roasted at Ley Hill, (then all open common) bread let down in heaps from carts, my first parasol alas! proving how heavy the storm by its green dye running upon the bread.