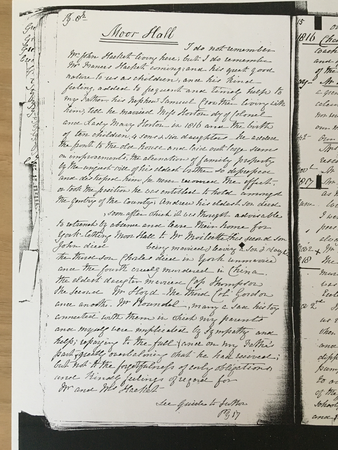 I do not remember Mr John Hacket living here; but I do remember Mr Frances Hacket coming; and his great good nature to us as children, and his kind feeling, added to frequent and timely help to my Father; his nephew Samuel Crow then living with him till he married Miss Horton dg (daughter) of Colonel and Lady Mary Horton in 1816 and the birth of ten children 4 sons and six daughters - he added the front of the old house and laid out large sums on improvements, the alienation of family property by the unjust will of his eldest brother so depressed and distressed him he never recovered the effect or took the position he was entitled to hold amongst the Gentry of the Country; Andrew his eldest son died, soon after which it was thought advisable to retrench by absence and leave their home for York - letting Moor Hall to Mr Moiliette. This second son John died being married and leaving a son and daughter. The third son Charles died in York unmarried and the fourth cruelly murdered in China. The eldest daughter married Cap Thompson, the second Mr Lloyd - the third Col Gordon and another Mr Roundel, many a sad history connected with them in which my parents and myself were implicated by sympathy and help; repaying to the full and on my Father's part, greatly overbalancing what he had received; but not to the forgetfulness of early obligations, and kindly feelings of regard for Mr and Mrs Hacket.