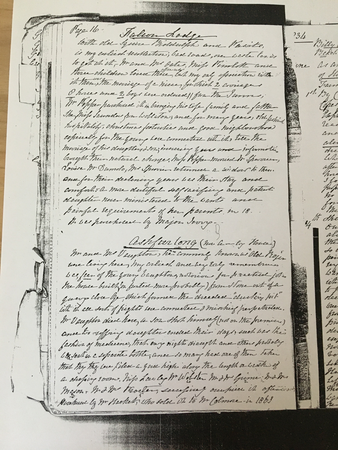 With old Squire Biddulph and Plewits? is my earliest recollection, bad roads, over waste lands to get at it! Mr and Mrs Oates, Miss Pimlott and three children lived there afterwards, but my only association with it then was the marriage of a niece, for which 2 carriages, 8 horses and 2 boys were ordered from the Tunns. Mr Pepper purchased it, bringing his wife, family and father. She, Miss Saunders, from Woollaton, and for many years, old fashioned hospitality, Christmas festivities and good neighbourhood especially for the young were connected with it, till the marriage of his daughters and son; increasing years and infrmity brough their natural changes, Miss Pepper married Mr Spurrier, Louise, Mr Dumolo, Mrs Spurrier returned a widow to them and for their declining years was their stay and comfort. A more dutiful self-sacrificing and patient daughter never ministered to the wants and painful requirements of her parents. In 18  it was purchased by Major Irving.

Mr and Mrs Vaughton, he commonly known as "Old Major" were living here. My earliest and very early remembrance was fear of the young daughters, notorious for practical jokes. The house built, or fronted more probably, from stone out of a quarry close by which formed the dreaded "ducking pit" with which all sorts of frights were connected and mischief perpetrated. Mr Vaughton died here, a son shot himself (not on the premises) and two suffering daughters ended their days, such was the fashion of medicine that every night's draught and other probably were (sent) in a separate bottle, and so many had one of them taken that they were piled a yard high along the length or width of a (dressing room). Miss Lawley, Mr Webster, Mr and Mrs Grime, Mr and Mrs Mason and Mr and Mrs Proctor successively occupied it afterwrds. Purchased by Mr Hacket, who sold it to Mr Colman in 1863.