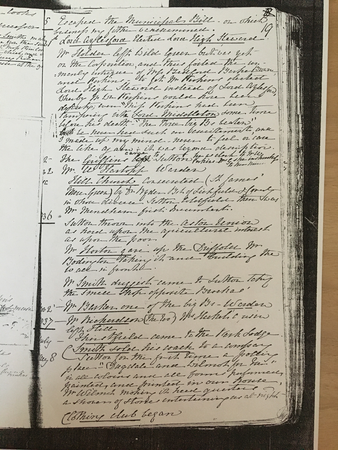 Escaped the Municipal Bill - on which business my father was examined.

Mr Holden left Wild Green but was yet on the Corporation and thus foiled the unmanly intrigue of Miss Bedford Barker Browne and Perkins - to get Mr Perkins elected Lord High Steward instead of Lord Aylesford, whereby Mr Wm Perkins would have been deputy; even "Miss Perkins had been tampering with Lord Middleton some time before his deathy. "The Thrice big Bs beaten" we never had such an excitement, and I made up my mind - never to feel or care the like again, it was beyond description.

The Griffins came to Sutton - he as clerk to Mr W Perkins - Mrs G - she instructress to her/his niece?

Hill Church consecrated (St James' Mere Green) by Dr Ryder Bishop of Lichfield and Coventry in whose diocese Sutton Coldfield then was.

Sutton thrown into the Aston Union, as hard upon the agricultural interest as upon the poor.

Mr Horton gave up the Driffold. Mr Bodington taking it and building the road in front.

Mr Barker one of the big Bs - Warden.

Thirstfield came to the Park Lodge.

C Smith sold his coach to a company.

Sutton for the first time a polling place "Dugdale and Wilmot for Ever" in all colours and all forms performed, painted, and printed in our house. Mr Wilmot making it headquarters and a shower of stories entertaining us at night.