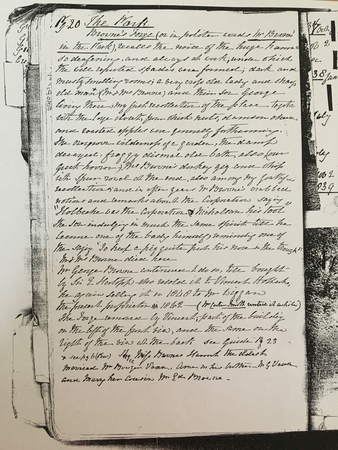 Brown's Forge (or in politer words Mr Brown's in the Park), recalls the noise of the huge hammer, so deafening, and always at work; under which the well reputed spades were formed; dark and musty smelling rooms; a very cross old lady and sharp old man *** (Mr and Mrs Browne) and their son George living there; my first recollection of the place together with the large closet, from which nuts, damson cheese, and roasted apples were generally forthcoming. The overgrown wilderness of a garden, the damp decayed forge dismal old bath, also (our great horror). Mrs Brown's donkey gig-and-whip with spur (rowel?) at the end, also among my youthful recollections; and in after years Mr Brown's crabbed notions and remarks about the Corporation, saying "Holbeche was the Corporation and Nicholson his tool". The son indulging in much the same spirit till he became one of the body himself, reminding one of the saying "To keep a pig quiet, put his nose in the trough".

Mr George Brown continued to do so, till brought by Sir E Hartopp who resold it to Vincent Holbeche, he again selling it in 1848 to Mr Wiggan the present proprietor, 1862 - (Mr Carter Smith rented it awhile).

The Forge removed by Vincent; part of the building on the left of the front view, and the same on the right of the view at the back - see Guide Pg 23.