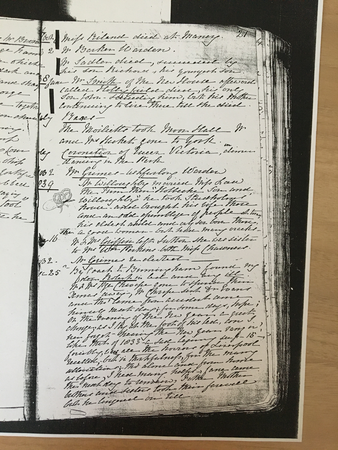 Mr Smith of the New House afterwards called Hollyfield died, his only son John - succeeding him, but his Mother continuing to live there till she died.

Coronation of Queen Victoria, dinner and dancing in the Park.

Mr Willoughby married Miss Law. The firm then "Holbeche, Son and Willoughby", he took Studholms' house - and brought his wife there and an odd assemblage of people at times, his eldest child and only son born there. She a good woman but had many cracks (?).

Mr and Mrs Griffin left Sutton, she was sister to Mr William Perkins - both Miss Chavasses.

By coach to Birmingham found my dear Robert in bed and very ill. Mr and Mrs Chavasse gone to spend their Xmas away. Mr Chavasse sent Dr Evans and tho' lame from accident came himself next day; for some days, hope, on the evening of the New Year, a great change, as I lay at the foot of his bed, can I never forget hearing the New Year ring in? Like that of 1833 - a sad beginning - see P15 - forcibly were all the horrors of Liverpool recalled - but in thankfulness, for the many alleviations; tho' alone and from home as before, I had many helps - Jane came the next day to remain, father, mother, brothers and sisters took their farewell but he lingered on till -