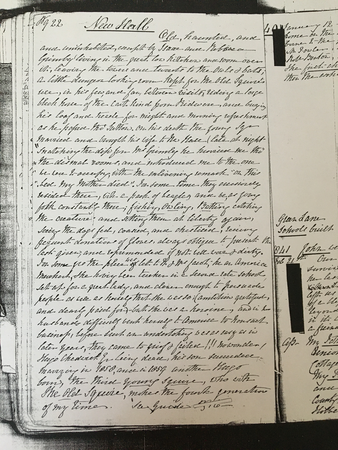 Old, haunted and uninhabited, except by Isaac and Rebecca Grimly living in the great low kitchen and room over it, leaving the towers and turrets to the owls and bats; A little dungeon looking room kept for the Old Squire's use, in his few and far between visits, riding a large black horse of the cart kind from Ridware, and buying his loaf and treacle for night and morning refreshment as he passed thro' Sutton. On his death the young squire married and brought his wife to New Hall (late at night "snatching the dip from Mr Grimley he hurried me through the dismal rooms, and introduced me to the one we were to occupy with the enlivening remark 'on this bed my mother died'") For some time they occasionally resided there, with a pack of beagles, and we, as young folk constantly there, fishing, owling, Batting, catching the creatures and setting them at liberty again, seeing the dogs fed, coaxed and chastised, receiving frequent donations of gloves, always obliged to present the last given, and reprimanded if not well worn and dirty. For some years, the place as let to Mr and Mrs Jacot, he an American Merchant, she having been a teacher in a second rate school set up for a great lady, and clever enough to persuade people as well as herself that she was so; (ambition gratified and dearly paid for) but she was a heroine, and in her husband's difficulty went herself to America to transact business, before such an undertaking was as easy in later years, they came to grief and failed!!! No wonder! Hugo Chadwick Esq being dead, his son succeeded, marrying in 1858, and in 1859 another Hugo born, the third young squire, who with the Old Squire, makes the fourth generation of my times (see Guide P16).