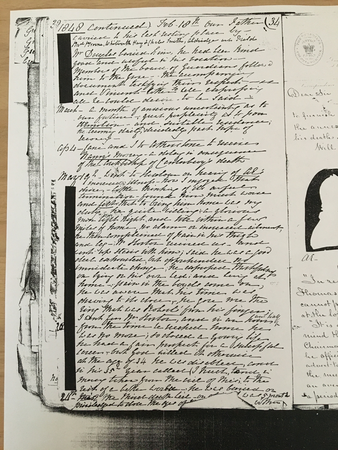 Our Father carried to his last resting place by Ricd (Richard?) Browne, Whitworth Hay and Charles Smith, Aldridge and Field. Mr Dugdale buried him, he had been kind good and useful in his vocation - Members of the Board of Guardians followed him to the grave - the accompanying document testifying their respect - and Vincent - talk(?) so well expressing all he would desire to be said.

A month of anxious uncertainty as to our future - great perplexity as to poor Aemilion - and suitable residence; he becoming daily decidedly past hope of recovery.

Jane and I to Atherstone to receive Nanny's money - a delay in consequence of the Archbishop of Canterbury's death.

Went to Haselour (?) on hearing of AE's increased illness - how I enjoyed that drive - little thinking of its awful termination - found him much worse and felt that to bring him home was my duty - he quite willing; a glorious moonlight night, and till within a few miles of home, no alarm or increased ailment, he then complained of pain in his thigh and leg - Mr Horton rescued us - and went up stairs with him, and he was a good deal exhausted, but apprehended no immediate change; he expressed thankfulness on lying on his own bed; and being at home - pain in the bowels came on, he was aware that his time was drawing to its close; he gave me the ring that was Robert's from his finger, I went for Mr Horton, and in an hour and a half - from the time he reached home, he was no more; so closed a young life; he had a fair prospect for a successful career, but God willed it otherwise, at the age of 34 he was disabled; and his 35 year called (I trust {indecipherable text} in mercy taken from the evil of this; to the rest of a better world - he was buried on 24th, the third death bed on which I was privileged to close the eyes of the {indecipherable text} within 5 months.