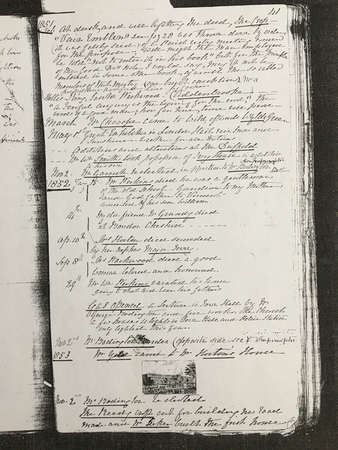 At dusk, and well befitted the deed, The Cross "Vain Emblem" - see pg 28, was thrown down by order (it was falsly said) of a Parish Vestry Meeting convened for the purpose; well might the man employed be told "Not to enter it in his book" but for the principle of the good Dr's note I would say, may it not be entered in some other book, against the so called members of this meeting (one bright exception*) Thos Wilkins - Rochford - Line - Jas Cooper - Hollis-King, Saxton, Packwood (Addenbrooke*)

"A fearful augury is the beginning for the end", the words of a good man, how far true, time will prove.

Great Exhibition in London. Hail, rain, snow and sunshine - weather for all nations.

Additions and alterations at the Driffold.

Mr Wm Smith took possession of Ivy House in additioin to his own.

Mr Perkins died - he was a gentleman of the old school - Guardian to my mother and Godfather to Vincent - succeeded by his son William.

Mr Wm Perkins vacated his house going to what had been his Father's.

Gas Opened. A lecture in Town Hall by Mr George Bodington and fireworks. The Church a few houses, 4 lights in Town Hall and Police Station only lighted this year.

Mr Bodington - Warden (opposite side - see).

The Ready Croft cut for building, new road made and Mr Secker built the first house.