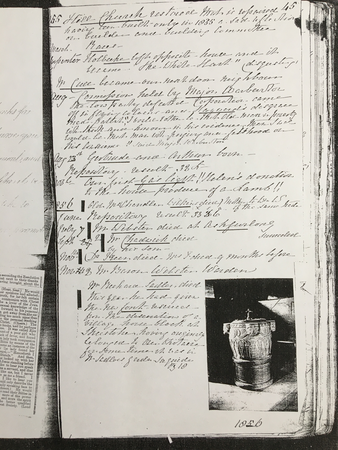 Hill Church restored, that is repaired, having been built only in 1835 a sad reflection on builders and building committee.

Carpenter Holbeche left opposite house and it became "The White Hart" (disgusting). Mr Cull became our next door neighbour.

Commission held by Major Warburton. The low party defeated. Corporation came off in flying colours and Haywards disgrace made patent. "I would rather be that old man in poverty with trust and honour in his evidence, that I would be that man with perjury and falsehood on his conscience!!" said Major Warburton.

Our first Gas Lights!! Helen's donation to the house produce of a Lamb!!

Mr Richard Sadler died this year, he has given the new font - rescued from the desecration of a village house block at Shustoke, having originally belonged to Over Whitacre - for some time it was in Mr Sadler's garden - see guide Pg 18.