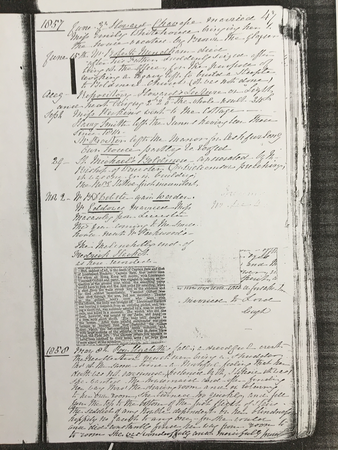 Howard Chavasse married Miss Emily Whitehouse, bringing her to the house vacated by Brown the Glazier.

Mr Robert Mendham died - after his father suddenly seized after being at the office for the purpose of revoking a legacy left to build a steeple to Boldmere Church (it was not done).

Miss Perkins went to the Cottage.

Harry Smith left the Tuns having been there since 1814.

St Michael's Boldmere consecrated by the Bishop of Worcester.

Dr Williamson preaching, it was one year in building; the Rev Kittoe first incumbent.

Mr Eddowes married Miss Macauley from Leicester, this year coming to the small house next to Mr Packwood's. The melancholy end of Frederick Hacket here recorded.

Poor Elizabeth's fall; a dreadful event. The recollection must ever bring a shudder tho' at the same time a thankful feeling that her death was not occasioned (hastened by it, I believe it was). She wanted the housemaid and after finding no way thro' the drawing room and in returning to her own room, she turned too quickly, and fell from the top to the bottom of the first flight of stairts, the saddest of any trouble dependent on her blindness, happily no fault to anyone - for she could and did constantly find her way from room to room. She was wonderfully and mercifully preserved(?).