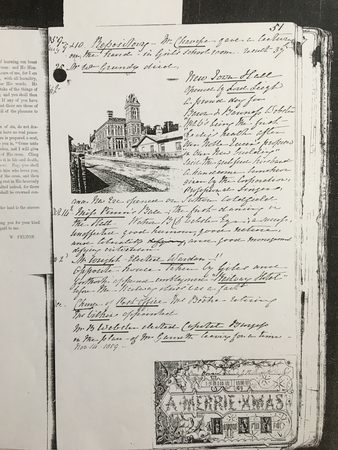 New Town Hall opened by Lord Leigh. A proud day for Baron and Baroness Webster "Mrs W's being the first Lady's health, after our Noble Queen's proposed in our new building," said the grateful husband. A handsome luncheon given by the Corporation, professional singers, and New Era opened on Sutton Coldfield.

Opposite house taken by Giles and forthwith appeared emblazoned "Railway Hotel" before the Railway itself was a fact.

Christmas Card from Howard and Emily (Chavasse) to the Sisters?