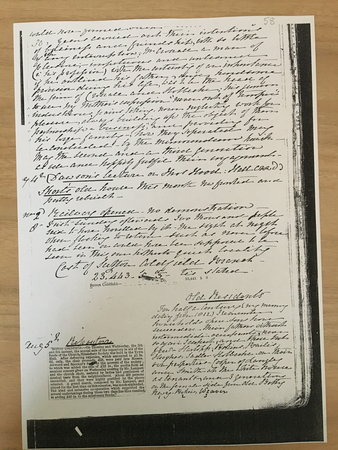 could have formed (missing words) 30 years carried out their intentions of business and friendship, with so little if any interruption. Mr Croxall a man of pleasure, impetuous and unlearned (in his profession) with the certainty of an inheritance if he outlived his father and handsome provision during his life, was to be the head of the firm of Croxall & Holbeche, his juniors, to use my Mother's expression, "never out of temper", industrious, painstaking, never neglecting work for pleasure, always building up the object of their partnership and business, and providing for his large family - how they separated may be concluded - by the memorandum herewith. May the second and third generation as well, and happily fulfil their engagement -

First Sunday afterwards Two thousand people said to have travelled by it - the sight at night when flocking to return - such as never before had been or could have been supposed to be seen in this our hitherto quiet locality.

Sutton Coldfield - On Tuesday and Wednesday, the 5th and 6th instant, the annual sale of the repository in aid of the funds of the Church Missionary Society was held in the Town Hall. After defraying expenses, which amounted to £1.3s.6d. only, the clear proceeds, £28, were paid into Messrs Attwood and Spooner's bank to the account of the society; to which was added the sum of £12.1s, the profits from an amateur concert given on Wednesday evening by Mr Lampert and the church choir, assisted by ladies and gentlemen of musical taste from the neighbourhood. About 400 persons assembled, and they were highly gratified by the pieces selected. A grand march, composed by Mr Lampert, and played for the first time on this occasion, was much applauded. The kind and extensive co-opeation which supported the several undertakings during these two days has thus resulted in adding £40. 1s to the missionary funds

For half a Century (my memory dating from 1812) I remember households where some have succeeded their fathers without intermediate occupants, never so again I expect, and these but few - Hartopp, Wilkins, Brailes, Hughes, Sadler, Holbeche, on their own properties - Cooper of Langley and Smith at the White house as tenants and 3 generations on the female side from Old Betty Newry - Perkins - Weaver.