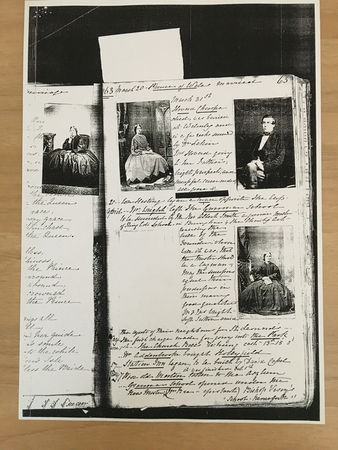 Howard Chavasse died, was buried at Walmley and in a few weeks succeeded by Dr Lakin. Mrs Howard going to her Father's; bright prospects and successful careers ended, all gone.

John Hastings began a house opposite the Cup.

Mr Wright left The Grammar School to be succeeded by Rev Albert Smith, a junior master of King Ed's school in Birmingham; the Charity Act reversing the Will of the Founder, whose will it was that the Master should be a layman. May the successors equal their predecessors in their many good qualities.

Mr and Mrs Wright left Sutton amid the regrets of their neighbours from St Leonards.

Blank photo - this was Mr Wright. It appears to have been removed to Richard Holbeche's diary!

The first charge made for going in to the Park.

Station Inn began to be built by David Capel. It was finished Oct 1.