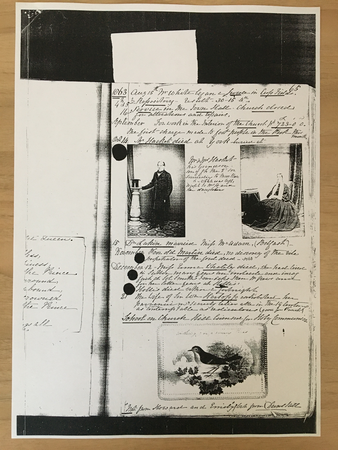 Service in the Town Hall - church closed for alterations and repairs.

The first charge made to foot people in the Park this month.

Mr and Mrs Hacket - his Grandson, son of John the 2nd son succeeding to Moor Hall - what was left, except to Mrs H and her daughter?

Poor old Martin died, no discovery of the vile perpetrator of the foul deed (Pg 63)

Miss Emma Whately died, she had lived in Sutton many years an imbecile and first at John Smith's Four Oaks, then Mr Grews (?) and for her latter years at Hollis'.

The wife of Sir Wm Hartopp exhibited her parvenue in "scarcely believable in the 19 Century, as contemptable as rediculous (good for Punch).

Not from Howard and Emily" but from Dunstall.