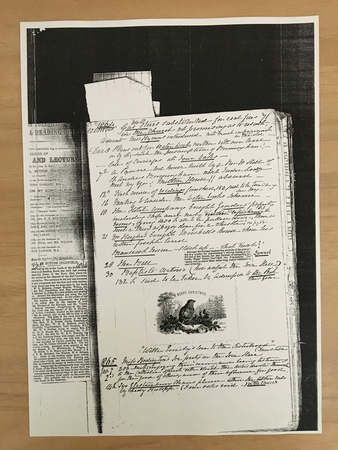 Gas Stoves substituted for coal fires in the Church, not promising as to result.

New Hymns introduced, not much improvement on the old.

Plans out for Water Works neither with our leave or by it; such the presumption of Birmingham!

Sale of Carriages at Four Oaks.

Fresh course of readings finished, 150 said to be tawdary (?), see May.

The Hotel Company bought Genders' property including shop and newly erected refreshment rooms, giving £1400 - all to be pulled down - there is such a thing as "paying dear for a wistle", see pg 56.

Brunswick Terrace - stuck up - what next?

Newscutting about the railway tunnel under the Severn.

£132 said to be taken by admission to the Park this year.

Christmas Card of a bird "With Emily's love to the Sisterhood" Dunstall.

200 met, enjoying their evening and hearing testimony to the Catholic spirit with which the sisters deveote themselves for the good of others, and of their influence for good.