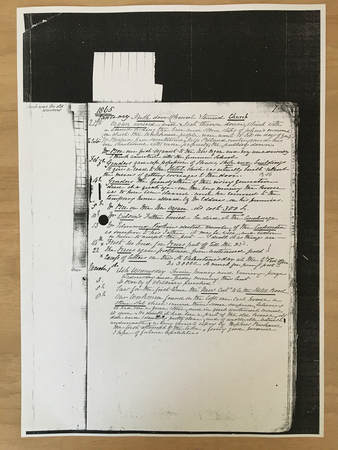 Organ arrived, and seat* thrown down, which with a second hiding the base and stone steps of Jesson's monument (on which the Workhoue people were wont to sit in days of yore) the late Mr Bedford had sanctioned. Miss Riland erecting, and his son sanctioned with more propriety, the pulling down.

Mr Bee our first organist to the New Organ and very unadvisedly I think connected with the Grammar School.

Gender gave up possession of houses, shop and buildings to give a road to the Hotel which was actually built without the means of getting carriages to the door.

Genders the Grandfather of the rising generation died at a great age - on the very morning the house was to have been cleared - and he removed to the temporary home allowed by Mr Eddowes - on his premises.

Mr Wilson's Father buried he died at the Anchorage.

Mr Edmund Perkins elected member of the Corporation as successor to his Father - it may be wise, and wisdom (?) in him to accept the post - I doubt it as things are.

Frost too hard for Races put off till the 23rd

*Excess of letters on this St Valentine's day at the General Post Office - 2,300 - so much for penny post.

Saw for the first time the "New Cut" to be the Hotel Road.

Our Workmen found in the loft over coal house stone slab causing them some surprise, believing it had been a grave stone and in great excitement carried it down. No doubt it had been a part of the old house. Its date and identity pretty clear - and of considerable interest underneath, a very correct copy of Nephew Richard the first attempt at the like, giving good promise I hope of future capabilities.