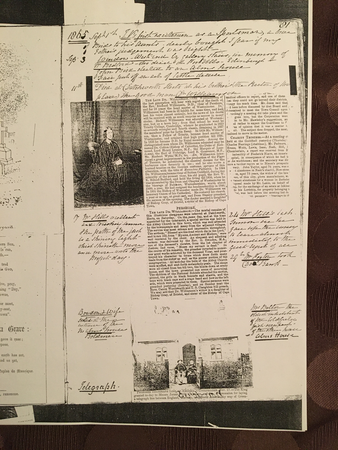 TV first excitement as a Sportsman, a brace of birds to his Aunts, dearly bought I fear, if my father's judgement was right.

Window - West end by gallery stairs, in memory of Mr Bedford - who died at Portobello?

Fair put off on a/c of cattle disease.

Died at Datchworth at his brother's (the Rector of that place) the good man, Dr Williamson.

Photo of Unknown lady with ringlets

Mr Hill's excellent and touching sermon. The path of the just is a shining light which shineth more and more to the perfect day.

Newscutting re Charity Trustees re imbecility of Frederick Nixon

Mr Hill's last sermon? he gave up the curacy to leave almost immediately to the great regret of all.

Photo of Bowdon & Wife seated at the entrance of the Alms Houses, Boldmere

Mrs Bolton, the oldest inhabitant of the Coldfield first occupant of the other house (in the above photo, presumably)

Newscutting as to Telegraph Line to America