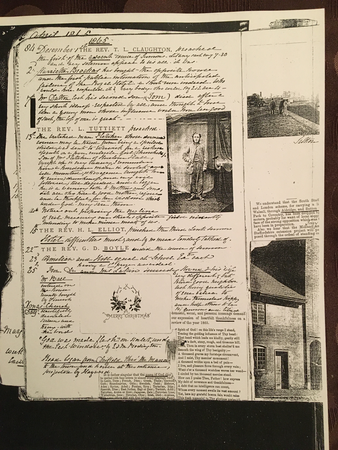 THE REV TL CLAUGHTON preached the firest of the Advent course of Sermons - Litany each evg 7.30 and very solemn appeal to us all it was.

Harriette Brockas has bought the opposite house and the first public intimation of the anticpated failure of the Royal Hotel - short run indeed - who would have expected it?

Mr Dutton lost his second son (Tom), died after a very short illness - respected by all, and thought to have been a young man whose influence would have been good of such, the loss of one is great.

Photo of Rev Tuttiett or Fletcher??

The wretched man Fletcher whose downward course may be traced from being a spoilt child, was sent to Warwick for a wicked assault on a poor imbecile girl (Churchill). Son of Mrs Fletcher of Haselor Hall, brought up in every luxury, I remember him a handsome man in hoslet and well mounted; extravagance brought him to ruin; drunkeness and every evil followed; till degraded and a beggar he is a warning both to Mothers and sons; Let all who hae a good mother rejoice and be thankful, for her wisdom under God may save them.

Notice out proposing the new line of rail measuring our streets and opposite field instantly intending to make mincemeat of us.

Hotel difficulties much; and by no means tenderly talked of.

THE REV GD BOYLE ended the course of sermons.

Amelian and Hill? equal at school Examination each having a 1st prize awarded.

From Dr and Mrs Lakin succeeding Howard and his wife, very different but kind good neighbours, each having qualities of rare value to make themselves happy and help others to be so, generous and liberal.

Xmas Day - Church beautifully decorated, screens and tracery with the words "God was made flesh" on scarlet, under the East Window by E and M Bodington.

Road began from Driffold thro' the Manor to the town and houses at the entrance projected by Hayward.