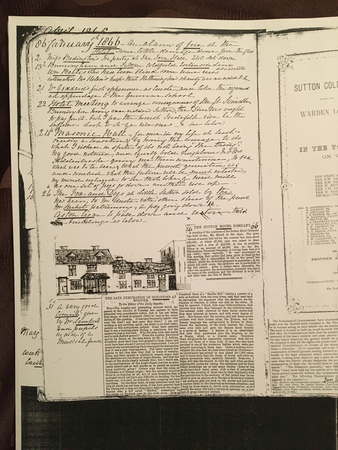 An alarm of fire at the Hotel - some little damage done from the flames.

Miss Bodington's tea party at the Town Hall. 240 sat down.

Wm Bailis who had been blind some time recvd intimation through Helen's help that Hetherington's charity was awarded to him.

Mr Goddard's first appearance as Curate, and like the organist an appendage to the Grammar School.

Hotel Meeting to arrange consequences of The Gt Swindle.

Birmingham having over-ridden Sutton, the Directors ought to pay for it - but I fear the honest tradefolk will be the sufferers. - Look to it - ye wise ones - *se below.

Masonic Ball - for once in my life at least, causing a sensation; by having the courage to do what I wished in spite of its not being "the thing". My good natured and equally bold neighbours Mr and Mrs Attenbrooke giving me their countenance, to see what was to be seen, what the present generation is, and conclude what the future will be, much entertained my mind enlarged, to see that like a tread mill as one set of pegs go down another set rise up.

The Fox and Dogs at Little Sutton sold by the new heir to Mr ?with other slices of the present(?) Mr Hacket(s)? patrimony - a peg going down!!

Aston began to pull down and restore old buildings as below.

Drawing of cottages beside Three Tuns?

Newscutting re The Sutton Hotel Company

A very good concert given by Mr Lambert and pupils in aid of a musical fund.