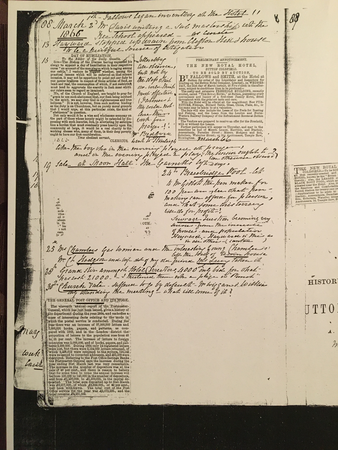 Fallows began an Inventory at the Hotel!!

Mr Davis uniting a sub-mastership with the Free School appeared as curate.

Hayward stopped up drain from Clifton Hill and house to be a fruitful source of Litigation.

Mr Bedford went to Stonleigh, like the boy who in the morning "played at prayer and in the evening played a play". The occasion ought to have been otherwise observed?

Bracebridge Pool - let to Mr Gillott the pen maker for 100 per an - see what pen making can afford for pleasure, and what some aristocracy will do for profit.

Sewerage Question becoming very serious - from the increase of houses - and population.

Hayward - Hayward in this as in all others, (cartoon?)

Mrs Chambers Gas Woman and the interesting young Chambers left the half of Acorn House. Mr CL Hodgkin and Wife, DH(daughter) of my old friend Mrs Lucy taken it.

Church rate - suffered to go by default - Mr Wiggan & Wilkins attending the meeting - what will come of it?

Newscutting re Post Office and its work - figures etc