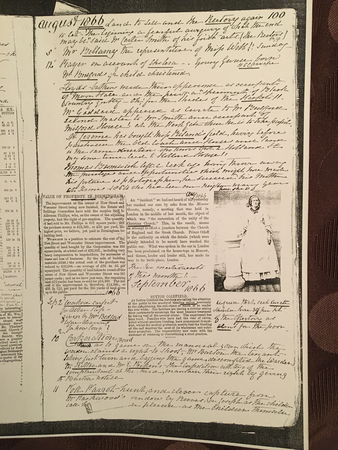 Land to sell and the Rectory again to let - "The beginning a fearful augury of what the end may be" said Mr Carter Smith of his first acts (The Rectors).

Lloyds - brothers made their appearance as occupants of Moor Hall and the pew, "specimen of Black Country gentry" - Oh! for the shades of the Hackets!!!

Mr Goodard appeared as Curate to Mr Bedford Second Master to Mr Smith once occupant of Milford House at the Park Gate where he is to take pupils. Mr Jerome has brought Miss Riland's field, having before purchased the Old Coach & Horses and land in the same direction - who knows but a Holland St may some time lead to Holland House.

Thomas Bromwich left a week ago having thrown away the privileges and opportunities which might have made his fortune as photographer, he succeeded his mother at Xmas 1864 who had been our neighbour many years. Here she is

Newscutting re value of property in Birmingham - New St/Worcester St

Newscutting - from Moscow Gazette re restoration of unity of Christian Church

Worked carpet for Altar Step given by Mrs Bedford before leaving for how long?

Corporation Feud - as to game on the manorial; over which the Warden claims a right to shoot. Mr Burton the tenant taking first turn and bagging the game, discomfited the Wardens Mr Kite and Mr E Perkins. The Corporation with two of the complaintants at the head, maintain their rights by giving Burton notice.