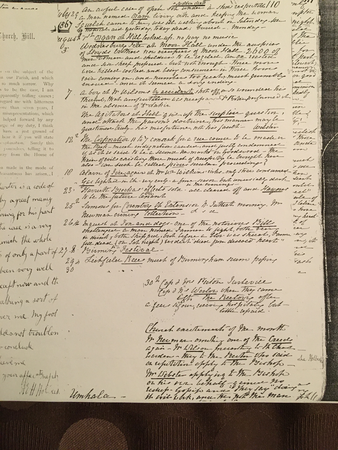 A sudden death. An awful case of open sin under a show respectable. A man named Oram (?) living with and keeping the woman Squelch(?) came to her, was ill, walking about on Saturday - seen by medical aid yesterday, today dead; buried - Monday.

Organ at Hill locked up - no pay, no music.

Wednesbury Fete at Moor Hall under the auspices of Lloyds brothers now occupiers of Moor Hall. 2600 of men women and children to be regaled, an ox roasted and six sheep prepared - but not enough. Three more were killed, cooked and being consumed in three hours, rain coming on, and numbers too great, much grumbling ensued - and it semed a sorry ending.

A boy at Mr Wilsons by accident shot off, or so wounded his thumb that amputation was necessary - Dr Porter performed it in the absence of Dr Lakin.

The Agitators at Hill give up the surplice question and attack the parson's doctrine, his manners may be questioned truly - his misfortune not his fault. Webster.

The Corporation - 11 to 7 consent for a race course to be made in the Park - much indignation cause, and justly condemned if as it is said to be a second new market or Goodwood - the train of evils existing there must of necessity be brought here also - can such be called pious secular proceedings?

Gas lighted in Church - very early - a fine season but unusually dark in the evenings.

Harriett Brockas' effects sold - all cleared off and Haynes to be future tenant.

Inquest at Fox and Dogs - one of the notorious Bills challenged a man named Farmer to fight both being in drink, both slipped, but before a blow was struck, Farmer fell dead (on Sat night). Verdict "died from deseased heart".

Church excitement of the month. Mr Newman omiting one of the Creeds again - Mr Wilson presenting to the Church Wardens - they to the Rector, who said on repetition apply to the Bishop - Mr Webster applying to the Bishop on his own behalf - gained no redress - gossip and "they say" doing its even work, and he's not the man to meet it.