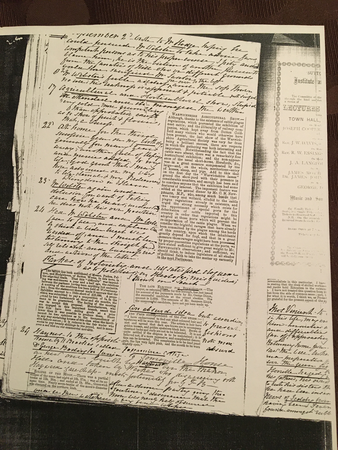 Wrote to Mr Hodge hoping he could persuade Mr Webster to take advice from competent persons as to his proper course, I pity and blame him, he is the victim of another persecution from the fanatics of Hill - who on different grounds would have sacrificed Mr (T) Saxton.

Mr Webster feeble address (see over to the left i.e. Page 111) and the sop thrown no use; his weakness is apparent and pitiable, not sinful.

Agricultural and Horticultural show, stupid, ill attended and ill managed the weather very cold, more grumbling than approbation, except as to show of fruit and flowers, that a success.

At home for the third successive year on my birthday, generally for many years away, another full of blessings and mercies added to my life; God grant that I may have advanced on my way to life eternal and my Redeemers Kingdom in Heaven.

Mr Webster again under delusion, for want of taking care how he hears; understanding he does not his own position.

Had Mr Webster and Mr Cull face to face, and explanation by which a wider breach was warded off and I must bear testimony to the straightforward self reliant and business view and action of the latter.

Parkes of notoriety and self satisfied eloquence as to politics on theology; misguided I think in each

Newscutting re elections for Birmingham - George Dixon as mayor of Birmingham

Newscutting re fashion re eyebrows and matching hair.

An absurd idea but according to present fashions not more absurd.

Haynes - to the opposite house by H Brockas called Jessamine Cottage.

Dr George Bodington Junior to Somerville House. A new one built by Hayward on the Manor Hill and taken by Parkes who disagreeing with Hayward gave it up - most fortunately for GFB (?Bodington).

After dinner party going thro gardens(?) I discovered that the moon was nearly half obscured and we then watched a very fine eclipse.

Newscutting re partial eclipse of the moon - 29 September 1867