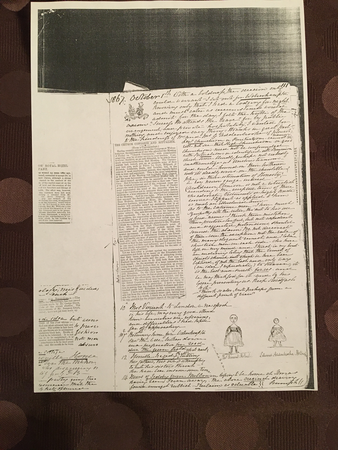 With a boldness the occasion only could warrant I set out for Wolverhampton knowing only that I had a lodging for night and must cater as circumstances would admit for the day. I felt the truth of the axiom "success attends the brave" for by public arrangement and private hospitality I wanted for nothing, and enjoyed everything - thanks, in great part to the kindness of Mr and Mrs G Addenbrooke of pleasant memory.

Large newscutting re The Church Congress and Ritualism (which, it would appear from the following, she attended)

Low Churchism or Puritanism cannot or will not see that High Churchism - or good Churchism - need not be confounded with Ritualism or identified with Romanism which some blindly perhaps, not wickedly anathamatizes as unchristianism - and would "hound on" their brethren into its deadly errors - on the charitable plea in their estimation of Honesty. A very narrow gauge indeed. (Archdeacon Denison is not a ritualist according to the accepted term of those who advocate vestments or highly ornate services - flippant, as applied to him, is merely an ill inclined term.

As to the extreme men - I have much sympathy with the writer, tho not to his use of hard names - I think them mistaken their practice lawful but not expedient and exaggerated pretensions, should sound the alarm "Be not deceived" of these were the exception, not the rule of the many eloquent earnest, and I believe christian men on each side - who have left on my mind - and I trust in my heart - an enduring belief that the branch of Christ's Church into which we have been baptised, if not the best and only way (an idea I repudiate) to Heaven, it is the best and surest for us, and we may thank God for it - and by his Grace preventing us, keep steadfast to it.

I think so also but perhaps from a different point of view.

Thos Vincent - to London a new epoch in his life may every good attend him - anxieties are ripening and difficulties I had hoped far off approaching. Returning home from Wolvlerhampton saw the wall broken down and preparation for road down the green field - what next?

Horrible tragedy - Pratt cutting his father's, his own and attempting to cut his sister's throat. He has been insane some time.

News of Teddy from Melbourne hoping to be home at Xmas having been seven away. The above original drawing found amongst rubbish - I retain as valuable? - humph!!!