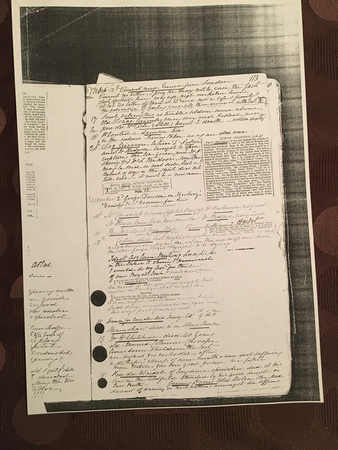 Vincent and Emma from London. Vincent no better. I pray he may not be worse. The fact which disturbs him may well night overwhelm him "at 62 no better off than at 32" and now a wife and family!! The advantage of keeping pace with those around without the means?

Planted a damson tree in the orchard - having taken away an old one.

Dog Grievance between Dr Lakin and Mr Hodgson brought to open rupture; the lies given, and Mr H showing Dr and Mrs L the door, something may be said on each side, but a kennel of dogs in the street does not tell well - it must be a nuisance

George Dawson on Thackery's "Vanity Fair" too coarse for his warmest admirers.

Corton died last night, singular and sad, that two old neighbours occupying under the one roof, one dead the other George Beach thought to be dying.

We heard of danger last night but could not realise what might be.

This is an awful visitation and but for God's doing marvelous in our eyes and his ways past finding out.

Hearnshaw died in an Alms House.

Poor old Wardel of long since association died at his son's on the Coldfield attended by his good daughter in law, Ruth. - Granny Harris told Helen she had dreamt of dancing in her pattens amongst the coffins.