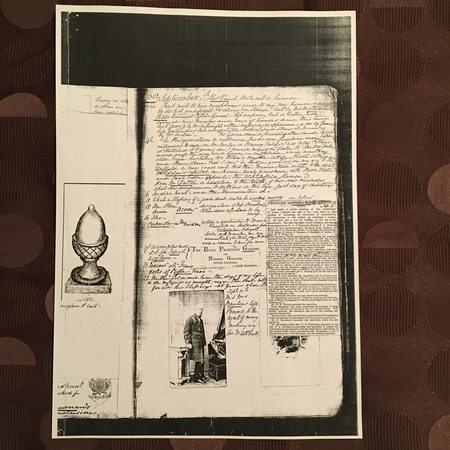 Thos. Vincent took out a license.

First visit to new neighbours and to the new house, designated by its past occupant "Wellington House" but by Mr and Mrs Ridout Wills termed "Wylde Green" - less imposing but in better taste. Several new houses and rows of houses since this time last year. 2 by Mr Cartwright, rather imposing in appearance, a row by Spurrier/Spooner/Spencer? less pretending but comfortable looking, and others at Maney by Mr Wild. No game come in, harvest gathered and birds wild.

A Perigrination in unknown lands, once familiar enough, intending to call on Mr Fowler in Maney Fields. I was told "This is Holland St!! going on I found myself in "Duke St". the Old Duke moved across the way and grown in importance, and another still larger hostelry Mr Atkins - Myrtle Cottage, Victor Cottage, and others where last I saw a hedge growing on my way to the Driffold a new road cut thro' the Manor Hill estate to the right.

Poor Mr Dutton in addition to his son's malady shot his companion Mr Arthur/Arthans? in the eye, first day of shooting.

Indian heat and the thermometer at -

The Stone House Acorn - designation of Miss Brackens taken down reported to be unsafe.

The Corporation in their wisdom voted a gratuity to Maria Vaughton on retiring from Coldfield School. Wise not to make her an annuitant, so that, say???and a woman lives for ever!

Review at Four Oaks of Riflemen

Mr and Mrs Rawlins left Penns, to the regret of many, making way of Mr Allbutt.