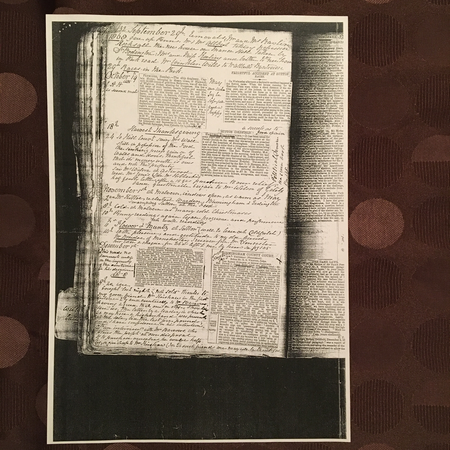 Races in the Park

EAH as second mate. May our sailor boy be safe; well good and happy.

To Hill Court seeing Mrs Wall still in possession of the Ford, the sinking process/force of walls and door, thankful that its money worth is ours and not the property.

Saw Mrs Wilson at Astwood received Mrs Jones (late Mrs Holbeche's half yearly letter after a 15 years purchase to our relief and questionable bargain to Mr Wilson of Gately.

At Malvern, windows open, as warm as May.

Cold at Malvern, as many cold Christmases.

Penny readings again began programme and performance not worth recording.

Flower & Muntz at Sutton (well to leave out Coldfield).

With pleasure and gratitude to my old friend Mr Beardoe(?) At Manchester I received from Mr Doncaster his Exor a cheque for £25 left to me by him.

Newscutting re sale of their house

This needs no comment unless on the ingenuity of the auctioneer in his description.

We were bought last night, "not sold" thanks to my good friend Mr Kirshaw in the first instances 2ly (secondly) and eventually to Mr Barrows having agreed that one or other should save us, the latter by a leading(?) in which we may trace a higher hand, was present at the sale, bid the last Five pounds and I have confidence in his intention.

An interview with Mr Barrows who places the profit at our disposal if to purchase ourselves he would help us, or give it up to Mr Kirshaw (for two such friends well may we be thankful).