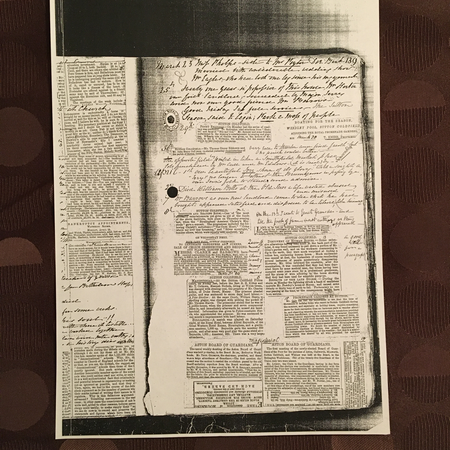 Miss Phelps - sister to Mrs Peyton, Doe Bank, married with considerable wedding show. Mr Eagles who had lost one leg since his engagement.

Twenty one years in possession of this house. Mr Horton our first landlord, succeeded by Major Terry and now our good friend, Mr Barrows.

Very well to threaten and find fault but no parish could better.

The opposite field paled in like a Smithfield market place - lots purchased by Mr Cull and Mr Eddowes (it is said) .

Our beautiful ivy - shorn of its glory "What a soight a "Ivvy" no longer to attract the Brumagems in passing bye, our Towns folk to stand and amire.

Died William Betts at the Old Sun a life wasted abused and misused.

Mr Barrows as our new landlord came to see what he had bought, appeared satisfied and disposed to be liberal (like himself).

On the 13th I went to Great Grensden till the first of June, insert cuttings as they appeared.

Sarah says - Queer, needs must when want of money

Land to be let on old Chester road near station

Storm caused fall of earth at Mr Fawdry's at Maney

Aston Board of Guardians

Aston Board of Guardians